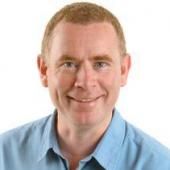 Kieron Burke is a professor in both the chemistry and physics departments at UC Irvine. His research focuses on developing a theory of quantum mechanics called density functional theory. Density functional theory is a way of solving the equations of quantum mechanics for the electrons in any substance. Because DFT equations can be solved relatively quickly on modern computers, DFT has become a very popular tool in many branches of science, especially chemistry and materials science. Last year, at least 30,000 scientific papers used DFT. For example, hydrogen sulphide was predicted by DFT calculations to have a high superconducting temperature under pressure, and a year later, it was tested and became the world-record holder, at 203K. According to google scholar, Professor Burke’s research papers are now cited more than 17,000 times each year.

The Burke group interests in EQI are several-fold. First, improved density functionals are needed for accurate calculation and prediction of heavier elements such as the lanthanides, not only in small molecules, but also in materials, with an emphasis on magnetic properties. Second, with the advent of quantum computing with quantum devices, in collaboration with Steve White, there is interest in what new computational chemistry can be achieved with several hundred qubits. Third, the group wonders if machine-learning algorithms can be used to accelerate progress in either of these challenges.